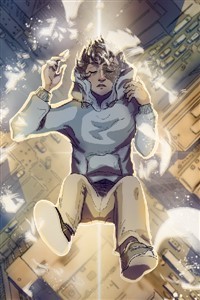 , by Rhythm, is a Web Serial Novel centered around James Toranaga, a young boy who, following an incident of sexual assault, develops the ability to fly.
Advertisement:

The story follows James and a small group of those around him as they attempt to come to terms with the trials and tribulations of emotional recovery in a world where weirdness is hiding just behind the veil.

While technically an action story, the plot focuses heavily on themes of psychological harm and recovery, and the consensus of reviews received on the Web Fiction Guide

seems to be that the true strength of the piece is in its realistic and compelling characters. That said, more recent chapters have been leaning a little more into the action side of things.

Trigger Warning: From chapter one, Touch deals with some pretty heavy themes, such as sexual assault and abuse, and a trigger warning is issued to any prospective readers. While it is generally regarded as handling the subjects responsibly, its degree of honesty means that it tends not to shy away from subjects that certain readers may find difficult.