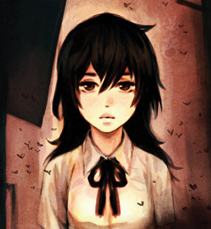 The heroine in her typical emotional state.
"You can turn into those…insects. I can feel people’s emotions through touch. Daniel-san has an Arabic friend who can do things to people from far away.” He took a step closer. “You’re not crazy. And you’re not alone."
—Sachi to Ayase
Advertisement:

Tokyo Demons is an English-language prose serial In the Style of... Japanese light novels. It is written by Lianne Sentar, edited by Rebecca Scoble, and contains one illustration per chapter by Priscilla Hamby (a.k.a. rem, illustrator for Devil's Candy). It follows the adventures of several supernatural individuals from the viewpoint of two teenagers, Ayase Watanabe and Jo Oda. The story follows them as they start high school, meet other super-powered individuals, and become embroiled in an underground gang war.

The series is a trilogy of books, starting in 2011 and wrapping up in late 2016. The series was originally found on tokyodemons.com and could be read for free, but eventually moved to Sparkler Monthly until the end of its original run. In addition, a fully dramatized audio

is also available and currently covers Book 1. The light novel updated on a monthly basis.

There are two sequel series planned: Tokyo Ghosts, set some years later, and Tokyo Angels. Ghosts put up its prologue chapter in early 2017 after the completion of Tokyo Demons, and began serialization in February 2019. The first series, as well as the preview of the second, can still be read in its archived page

With the dissolution of Sparkler Monthly in January 2021, the book series' fate is in limbo.