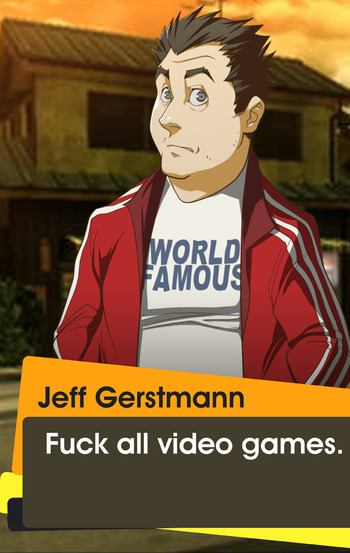 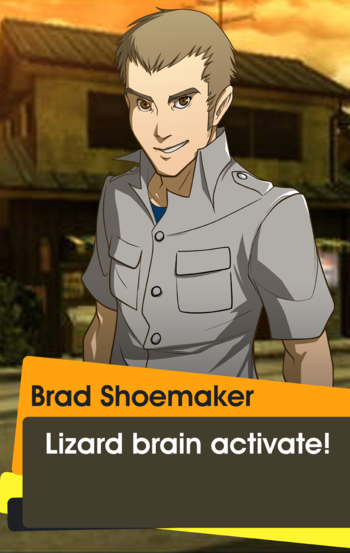 A reviewer who joined the site in June 2008. He is the current host of the Giant Bombcast.

Formerly an intern during the Whiskey Media days, Ben was announced as the new Giant Bomb West hire on 5/01/17. He is a regular on the Giant Bombcast. 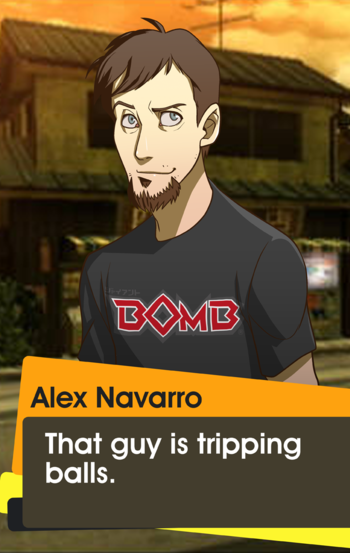 A reviewer who worked for a movie site called Screened and also contributed to Giant Bomb part-time. After Giant Bomb's acquisition by CBS Interactive, he joined the site as a full-time employee. As of 2012, he lives in New York City and serves as one half of "Giant Bomb East", working with Vinny separate from the site's main office in California. He reviews many games, writes his own column on the site called The Guns of Navarro, and also writes some news. Alex was an infrequent guest on the Giant Bombcast before moving, and currently is a regular on the Giant Beastcast, as well as co-hosting the Powerbombcast and Box Office Bomb, the site's movie podcast. 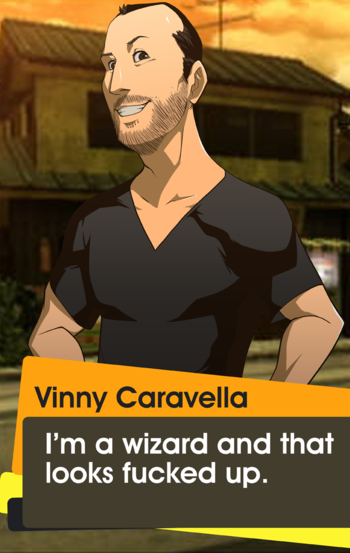 The lead video producer who is as prominent a personality as the editors. Vinny wrote a few reviews in the early days, but producing and managing video seems to eat up most of his time now. Moved back to his home state of New York in mid-2014 to join Alex in establishing a Giant Bomb office on the east coast. He was a weekly guest on the Giant Bombcast until his relocation, and currently hosts the Giant Beastcast. 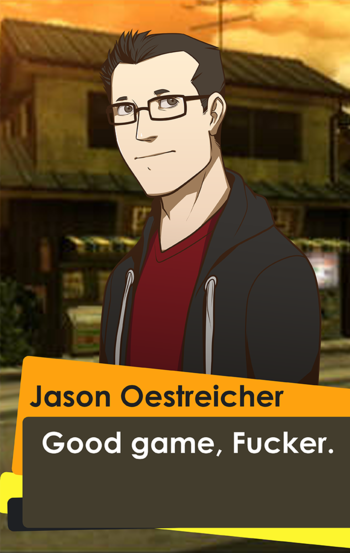 Formerly of Game Informer, Jason joined as the site's new video guy alongside Dan in July 2014. He was an infrequent guest on the Giant Bombcast before becoming a regular after Drew left.

The newest member of the Giant Bomb West team, whose hire was announced on 11/15/17. Since then, he and Jason have alternated production duties on the Giant Bombcast.
Other Employees 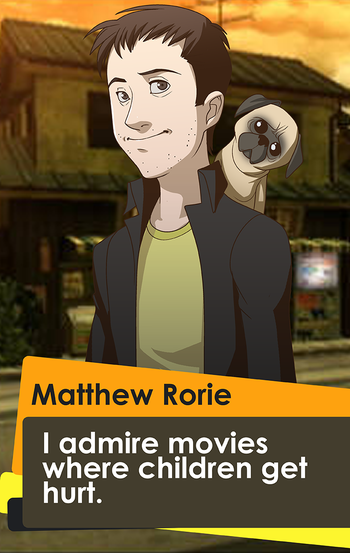 A site engineer and community manager, usually the one who monitors the chat during livestreams. Co-hosted Box Office Bomb with Alex.

A digital marketing employee for CBS Interactive who oversees revenue streams for the site. Business Dave likes it when the numbers go up.
Fictional Characters

The man in charge of gathering advertisements for the Bombcast and reading them during the podcast. Voiced by Jeff Gerstmann.

A recurring character in the Bombcast ads, often told how the advertised product in question can help his small business. Voiced by Vinny Caravella.

"The Prescriber of Pain" with a dubious doctorate, Dr. Tracksuit tends to only emerge from hiding during League of Heels events. The only one who can control him is his "manager" Jeff Gerstmann, to whom he bears a slight but entirely coincidental resemblance.
Former Employees 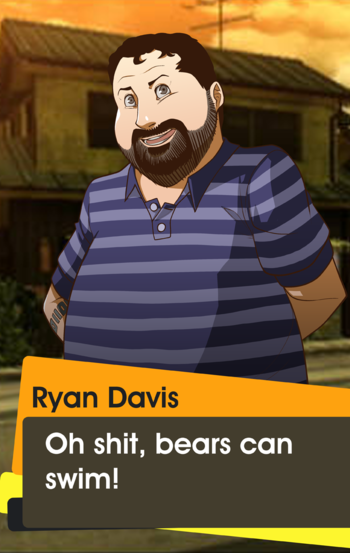 The other co-founder of the site alongside Jeff. He was the former host of the Giant Bombcast, as well as live shows. In addition, he reviewed games infrequently. Ryan passed away on July 3, 2013, at the age of 34. 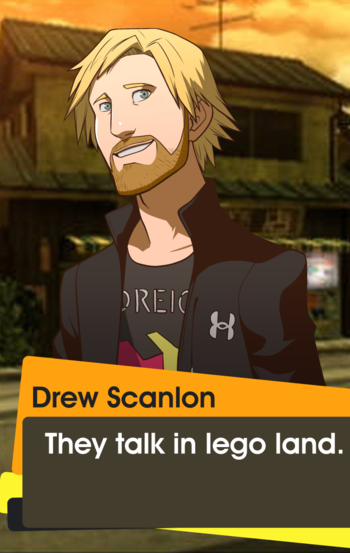 Former video producer who showed up often in video features and live shows. Before leaving in March 2017 to start his "Cloth Map" documentary series, Drew was a weekly guest on the Giant Bombcast from 2013 onward, and co-hosted Alt+F1, a podcast about Formula-1 racing, with Danny O'Dwyer (currently still running under a new name, Shift+F1). 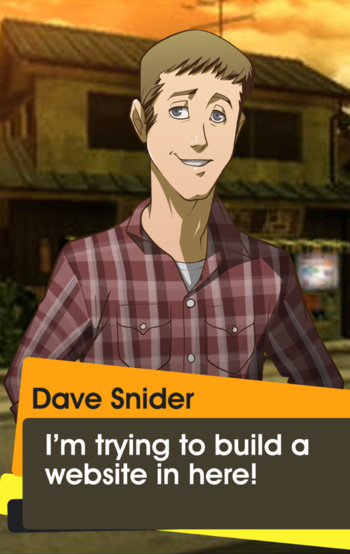 The former lead site engineer who often appeared in video features and left the site in 2013 to spend time with his family. Dave was an infrequent guest on the Giant Bombcast and wrote a few reviews. He still makes an occasional appearance on the Bombcast and Premium videos.

Behind-the-scenes tech guy who was sometimes heard in the background, and almost never seen. The guy that the Bomb Crew were talking to when they say "Can we get a little more game audio/big knob out here, Ian?"

Another site engineer who sometimes appeared in video features. Alexis left the site in October 2014 for a position at Twitch, though he occasionally pops in from time to time, most notably to co-host part of the crew's annual Extra Life streams alongside Drew. 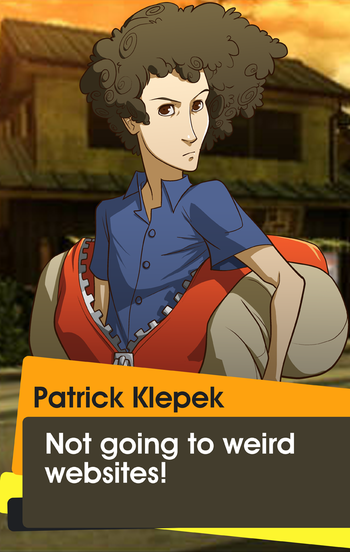 The main news editor who joined in April 2011. Patrick wrote many news and opinion columns for the site and also reviewed games. After several years in the main office, he moved back to his hometown of Chicago in the summer of 2013. He was a weekly guest on the Giant Bombcast during his time in California, and co-hosted Bombin' the AM with Scoops and the Wolf with Alex. After some foreshadowing with the announcement of a News Editor position opening up at GBeast earlier in the year, Patrick left the site

in December 2014, becoming a senior reporter for Kotaku then later Waypoint (hired by fellow alumnus Austin Walker), though he still occasionally pops up at convention panels and in a few videos. 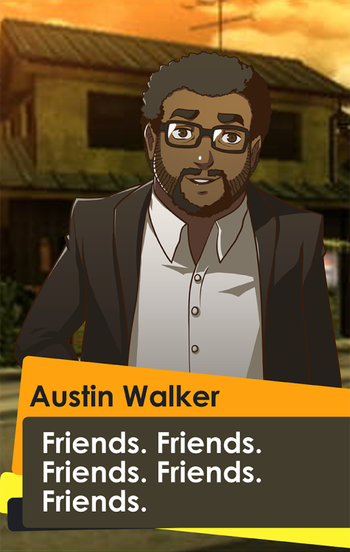 Formerly a freelance games writer who has done articles for Paste, the New Statesman, and his own blog at clockworkworlds.com

, Austin Walker was announced as the new News Editor at the end of the 5/29/16 Giant Beastcast. In addition to writing news articles for the site, he was a regular on the Giant Beastcast and appeared on the Powerbombcast. Austin announced his departure from the site in June 2016, becoming the editor-in-chief for the newly-established Waypoint (bringing fellow alumnus Patrick on board in the process), though he still pops up on the Beastcast every so often. 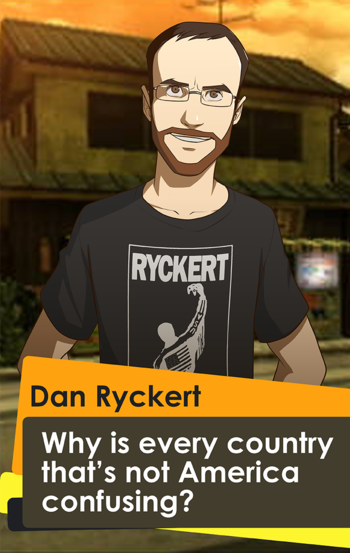 Formerly of Game Informer, Dan joined Giant Bomb as a Senior Editor in mid 2014. At the beginning of 2017, Dan relocated to New York and became part of Giant Bomb East. He was a weekly guest on the Giant Bombcast until his relocation, at which point he became a regular on the Giant Beastcast, and co-hosted the Powerbombcast, All Systems Goku, and Danswers, a life advice podcast with Danny O'Dwyer. Dan left the site in early 2020 to become a podcaster for WWE.

A video producer whose hire was announced on 5/01/17, and the first female member of the team. She was a regular on the Giant Beastcast and co-hosted My First E3 with Ben from 2017 to 2019. Left the site at the end of November 2020, coinciding with the site being sold from CBS to Red Ventures, in order to pursue other interests.
Friends of the Site

A comedian with the UCB Theatre in New York. Pat has guested on the Beastcast several times, and Giant Bomb members will regularly appear on his "404ing It: Breaking (Down) the Internet" panels at PAX and other conventions, featuring strange videos from around the internet. 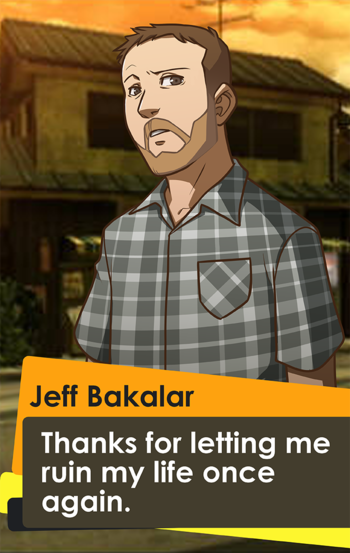 Co-creator of the Mortal Kombat series, and the Creative Director of NetherRealm Studios, formerly of Midway Games.

CEO at Iron Galaxy Studios, formerly of PlayStation and Midway Games with Lang and Johnny V

Of Tested.com. Used to be part of Whiskey Media with the guys.

Director of Portfolio Strategy at PlayStation, formerly of Harmonix.

Producer at Disruptor Beam. Used to work at GameSpot with the guys.

Social media manager for Waypoint. She and Abby have become good friends, and Danika has made several appearances on Giant Bomb videos.

Creative Director of Supergiant Games. Formerly a game journalist at GameSpot with the guys.

Producer at Twitch, and a former video producer for GameSpot.

Host and producer at GameSpot, and frequent guest on various Giant Bomb East podcasts and content.

Co-hosts of My Brother, My Brother and Me and former editors at Polygon.

Co-founder and host of Kinda Funny, formerly of IGN.

Independent video game documentarian at No Clip, formerly a host and producer at GameSpot.

Dan's dad, who has appeared in several features when he or Dan visit each other.

Founder of FOO VR, formerly of Tested.com. Used to be part of Whiskey Media with the guys.

PR rep at Ubisoft, formerly of GameSpot. Used to co-host the Powerbombcast with Jeff, Alex and Dan.

WWE professional wrestler and star of the Up Up Down Down gaming series on YouTube.