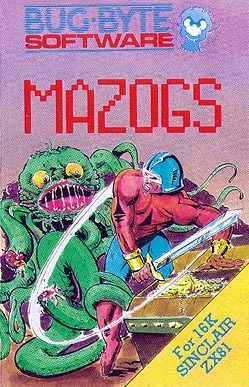 Mazogs is a Maze Game developed by Don Priestley and published by Bug-Byte for the ZX81 released in 1982. The game involves you exploring a randomly generated maze to find treasure, then get back to the starting point, but the mazogs roam the halls and won't hesitate to kill you if you get too close. You can pick up a sword to defend yourself, but you can't carry both the sword and the treasure at the same time. You can also free prisoners and they'll show you where to go with "THIS WAY" signs for ten seconds.

The game received a sequel called Maziacs on the ZX Spectrum and several other platforms in 1983.