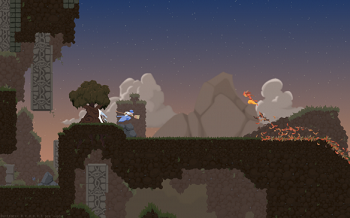 Dustforce is an acrobatic 2D platformer produced by indie developer Hitbox Team. You play as the Dustforce, a band of the most athletic cleaners in the world. Your objective is to dash, Double Jump, Wall Jump, wall run and somersault through twisting Parkour racecourses while cleaning up all the dust that litters its obscure corners.

The game is Le Parkour at its finest as you will have to pick the optimal path to take you past all the dust and use dizzying combinations of wall-running to keep you on track. The game is focused on flowing gameplay, with a scoring system that awards not only dust collected but combos, meaning you will need to use seamless platforming to avoid stopping collecting dust. Only a perfect run, collecting all the dust without stopping, will net you the highest SS ranking (S+ in the prototype).

Of particular note are the dust mechanics. As well as looking beautiful the dust (or leaves etc.) clings to floors, walls and ceilings and is placed in such a way to mark the optimal path through the level. While you will still have to work out how to collect it all, you can deduce what kind of sequence of acrobatics is required to proceed.

The game was released on Steam on January 17, 2012. An extensive prototype demo was released a while back, including a set of levels and a full level-editor. Each level has a different character, with some emphasizing acrobatics, others smooth combo-building, and one showcasing some Nintendo Hard platforming. Be warned though that this prototype is out of date, running on an entirely different engine and having much more temperamental controls than the final product. You can find the prototype here

A PlayStation 3 and PlayStation Vita port was released on February 4, 2014. An update, Dustforce DX, was released on October 23 of the same year, reworking the tutorial and hub, as well as adding more levels (including the user-made Community Map Pack).