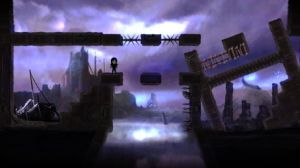 Munin is a 2014 Puzzle Platformer game, developed by Gojira and Daedalic Entertainment. It is based in Norse mythology, with the titular Munin being the raven messenger of Odin, who’s been turned into a mortal human by Loki. The only way for her to change back into the true form and return to Asgard is to collect her lost feathers, scattered throughout the worlds. Besides walking around and jumping, Munin is also capable of remotely rotating individual segments of the world she's in, and the solutions typically rely on exploiting this mechanic while taking the unique properties of every world into account.