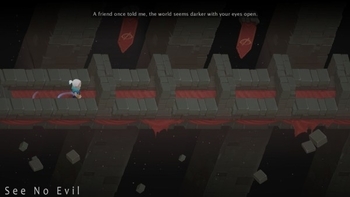 See No Evil is a 2014 puzzle game, developed by Gabriel Priske and his team in Game Maker engine. It is set in a world where the majority of humans have chosen to abandon sight and live with their eyes always covered to hide themselves from the evils of the world. People who refuse that and still choose to see are known as Seers, and are persecuted by the society.

The game begins when a dead Seer falls through the roof of our protagonist’s house. The noise startles him and forces him to take the veil off. He finds that the dead person has apparently being killed for refusing to cover his eyes, and takes this as a signal to flee, picking up the Seer’s journal for guidance. Many challenges follow in his quest to escape this world, past the many patrols used to such escape attempts.

The game can be bought here