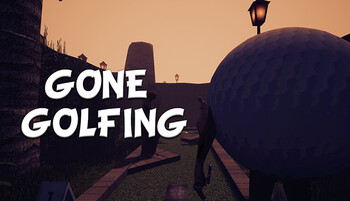 Gone Golfing is a Survival Horror Video Game by Icehelm.

You're walking home from a crummy day at work when you spot something. It's the newly-opened Cozy Cove miniature golf course. You decide you might as well go in and play a few rounds. Might be a good way to unwind after the day you've had. What's the worst that could happen?

Well, for starters, the entire place seems to be deserted. No staff on duty at all. And there's this guy in a golf-ball costume covered in red stains with an ax lurking around. And this giant fish on legs. And for some reason you can't leave until you finish your game...

The game was released on November 4th, 2020, and can be downloaded from Steam

Later on a an update was added, which included the free DLC episode: Gone Fishing. It expands the lore of Mr. Golfy's father (who was apparently more into fishing than golf).