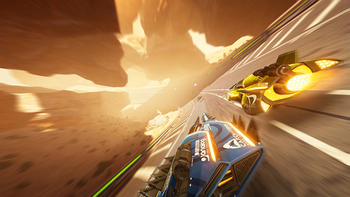 FAST Racing League is a futuristic racing game for similar in style to the F-Zero series and made by developer Shin'en, creators of Jett Rocket, for WiiWare. It is set in the same universe as Nanostray, with a lot of locations and fictitious brand names taken from that series.
Advertisement:

The main feature of the game is the ability to "phase shift" or change the color of your car from white to black (orange and blue in Neo and RMX), which allows you to take advantage of different parts of the track, matching the phase of your car to the phase of the track gives bonuses such as boosts and jumps, not matching your phase on the other hand can slow down your car or even send it careening to its death.

Like Shin'en's previous WiiWare game, FAST Racing League manages to cram an impressive amount of graphics and gameplay into so just 40 megabytes of data, pushing the Wii to its limits. In 2015, a sequel, FAST Racing Neo, was released on the Wii U, followed by FAST RMX, an Updated Re-release of Neo on the Nintendo Switch, in 2017.