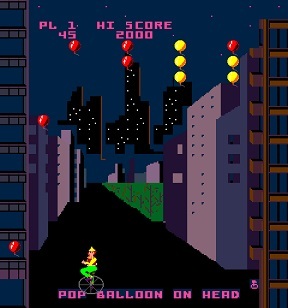 Kick Man (alternatively called Kick) is a 1981 Arcade Game from Midway Games. This game has you playing a clown on a unicycle controlled by a trackball and your mission is to catch and/or pop balloons on your head. If you miss a balloon, all is not lost as you can kick the balloon back into the air hence the game's name. If a balloon hits the ground, you lose a life. The game alternates between rounds where you have to pop the balloons by catching them on your head and rounds where you have to simply catch the balloons; you pop them after getting enough on your head.

Pac-Man also appears in the game as a Special Guest. He will appear in some rounds and like the balloons, you have to catch Pacman on your head. He'll also eat the balloons for extra points and any ghosts which you can also catch in the later rounds. Bonus rounds include having to catch balloons on your head tossed by people in buildings on both side of the screen while avoiding bombs they throw at you.

Kick Man had at least one port, to the Commodore 64. According to the AtariProtos page

, a port for the Atari 2600 was planned but ultimately cancelled.