Video Game / The Adventures of Lomax 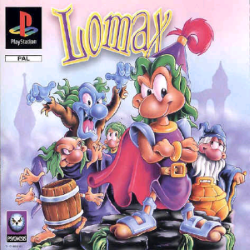 The Adventures of Lomax (known in Europe and Japan as simply Lomax) is a 2D Platform Game for the original PlayStation and PC and a spin-off of the Lemmings series. It was released by Psygnosis in 1996 and designed by Erwin Kloibhofer and Henk Nieborg. It is sometimes considered a Spiritual Successor to the earlier games made by those two developers, namely The Misadventures of Flink and Lionheart for the Amiga, due to sharing the same art style and several gameplay elements.

You play as Lomax, a lemming hero who has to save the Lemmingland from Evil Ed, a bad lemming wizard who transforms lemmings into all sorts of monsters. Along the way Lomax gets to use several of the classic lemming skills as well as the abilities of his magic helmet.

Not to be confused with The Lorax.