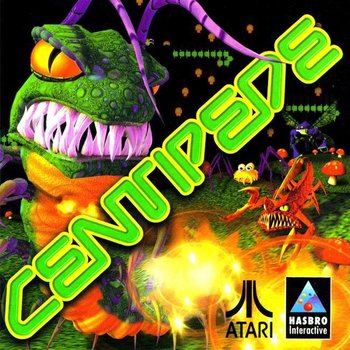 "This story begins every hundred years. It always begins in the same way - with a legend awakening. The Legend says that a multitude of armored beasts emerge from the dark core of the earth. They swarm to the surface, drawn by their master. Every hundred years, they try to overtake our world, and we always think we've destroyed them. The legend also has it that every hundred years... we're wrong!"
— The Narrator, Opening Cutscene
Advertisement:

Centipede is a 3D update/remake of the 1980 arcade game of the same name released in 1998 by Hasbro Interactive, and was the first in a series of remakes of Atari arcade games after Hasbro's purchase of the Atari assets earlier on in the year and following the success of their Frogger remake a year prior.

The game was originally released on the PC, and was ported to the PlayStation and Dreamcast in 1999, and the Macintosh in 2001.

This time, the chosen hero is Wally, a simple bean counter. He may not be the usual hero, or a hero at all, but he's going to have to make it happen.