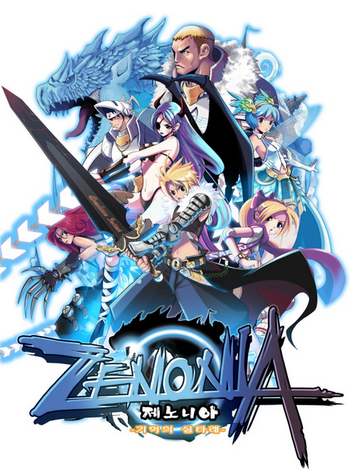 Zenonia is an Action RPG series by Gamevil for the iOS and Android (with the first one available on DSiWare and as a PlayStation mini, as well). It allows the player to select classes, which are different between games.
Advertisement:

The first Zenonia was released in 2009, and follows the story of Regret, a child found by the Holy Knights commander Dupre in the midst of war. After Dupre finds the child, he resigns from the Holy Knights to raise him, bringing suspicion among his colleagues. Years later, Dupre, now known as Pardon, lives in the town of Ayles with his son. One day a demon appears in the town and Pardon attempts to fight it off but is killed. The rest of the townsfolk start treating Regret coldly, and an unfortunate misunderstanding involving a tree kicks off Regret's journey. In the neighboring town of Adonis, he learns that long ago, a man named Argos sealed a great evil using five seals throughout various dungeons, and that recently, the seals are beginning to weaken. It's up to Regret to visit the five seals, and either make sure they stay intact or break them, depending on your choices.

The second instalment, Zenonia 2: The Lost Memories, was released a year later, but takes place years after the first. By fate, a group of four people meet up in prison and stage a breakout. They become entrusted with the task of keeping the Sealed Evil in a Can sealed once again after it attempts to escape. Each of the four people has a different story.

2011 saw the release of the third instalment, Zenonia 3: The Midgard Story, which returns to the realm of only having one player character, a young boy named Chael. Chael was constantly bullied as a child, which is why he took up fighting. Right after his first test he gets sucked into a mystical world between heaven and earth and must find his way back home.

The fourth instalment, Zenonia 4: Return of the Legend, was also released in 2011 and follows Regret once again, this time taking him through space and time in an effort to elude the surviving Dark Lords who seek to resurrect Ladon.