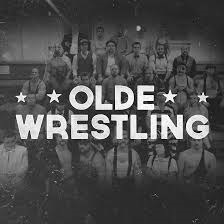 Olde Wrestling is a Professional Wrestling promotion in Ohio started in 2013 by Marion Fontaine. The concept is "a one-night wrestling/reenactment event celebrating the competition of professional wrestling as it was presented at the turn-of-the-20th century." It can be found here

While the promotion is not directly affiliated with CHIKARA, several CHIKARA wrestlers have competed there.

"Yet Another Extravaganza of Wrestling Tropes"