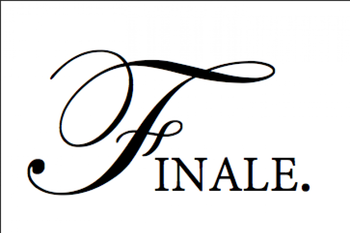 Nothing is Guaranteed.
“The world is a microbe. There's earth, which can fit more than a thousand times in jupiter. Then there's the solar system, and the galaxy, this galaxy and a million others, similar, alike and different. The earth is literally one in a million; hence, a microbe. Almost as surely to be as small as a cell. Everything is a single cell in a sea of other cells, each one unique. If one single cell were to die, the world would live on. It would simply be a microbe among other microbes that ceased to exist. A single cell in a large vast sea, a single earth in jupiter, a single penny out of a million dollars that is ceasing to exist. It's as simple as that. So what's the difference between a penny and a planet? Nothing. Everything else lives on, even after its time. And in the end, all microbes crumble, and that's... okay.
— The Narrator
Advertisement:

Finale is an original musical written by Julia "Jay" Veloso and Brian Sumerau. The plot focuses on the lives of several different, ordinary people and how they are affected when each of them finds out they have less time then they think.

However, all of these seemingly ordinary situations have their stakes drastically raised at the end of Act 1.

These ordinary people are all now forced to make the most important decision of their lives: how to spend their last few days. The entire show is looked over by an omniscient Narrator to provide us with all the Exposition Dump we need to understand the world.

The show's gofundme page is here

Tropes present in "Finale" include:

This is Tyler Jenson, signing off.