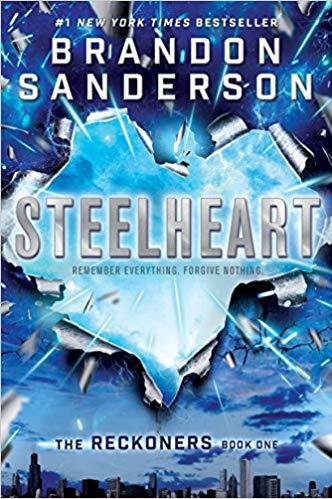 Beware the Superman.
"I've seen Steelheart bleed. And I will see him bleed again."
Advertisement:

First book in The Reckoners Trilogy by Brandon Sanderson, Steelheart takes place in a world of supers called Epics. Epics have extraordinary and wondrous abilities, but every single one is, without exception, an evil sociopath who sees nothing wrong with dealing death for even the most minor of offenses.

Chicago is ruled by one of the worst Epics of them all, a tyrant who calls himself Steelheart. Imagine Superman as an Evil Overlord: he can fly, he is superhumanly strong, he shoots energy beams, he appears to be completely invulnerable, and he is a ruthless dictator who commits mass murder without qualm or hesitation.

The only people who dare to fight back, anywhere, are a band of freedom fighters called the Reckoners. They study Epics, try to learn the weakness each one has, and assassinate them whenever possible.

The protagonist, David, is an 18-year-old who has lived under Steelheart's tyranny since the beginning. For ten years, since the day Steelheart murdered his father, he has studied Epics, plotted revenge, and searched for a way to join up with the Reckoners. Because David, alone out of all the people who were there, survived the incident, and was a witness to the only time that Steelheart showed that he also has a weakness. David has seen Steelheart bleed.

A short story, Mitosis (taking place between Steelheart and Firefight) is available for digital download from Sanderson's website

, with John Levy and Carter Blanchard attached to the project.