Literature / The Lions of Al-Rassan 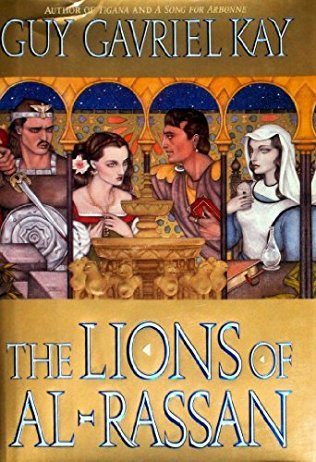 The Lions of Al-Rassan is a 1995 fantasy novel by Guy Gavriel Kay. Its world is based off the Spanish Reconquista.

The story begins with murder. King Almalik of Cartada, the largest of the three Asharite kingdoms in Al-Rassan, arranges for a large number of his enemies slain in one afternoon. The Kindath physician, Jehane bet Ishak, inadvertently keeps one of her patients from the execution, and is forced to flee her home town of Fezana. Following the event, the notorious military strategist and poet Ammar ibn Khairan of Cartada, former advisor of Almalik, is exiled. Meanwhile, in the Jaddite-controlled north, renowned Captain Rodrigo Belmonte, the man used to collect tribute from the southern kingdoms, is ordered south to quell a feud with his rival Gonzalez de Rada, and to do reconnaissance on the Asharite kingdoms in preparation for war.

Jehane meets Ammar in Fezana in the day of the massacre, the day that will changes their lives forever. However, they part ways as Jehane flees the city. Outside the city walls she meets Rodrigo, as he settles old debts with Gonzalez' brother Garcia de Rada in the midst of a particularly ugly battle. Rodrigo's life also take a turn that day, as he is sent to exile by his king, Ramiro of Valledo, following the events.

The three meet in the city of Ragosa and soon become good friends. In the service of the Ragosian king, they fight thieves, hired killers, and religious fanatics. A love triangle begins to develop between Jehane and the two men. However, the shadow of war hangs heavy over them, and they know that soon they may see each other on opposite ends of the battlefield...

There have been rumors of a film adaptation, which have as yet come to nothing.Now has a Character Sheet.

The Lions of Al-Rassan contains examples of: