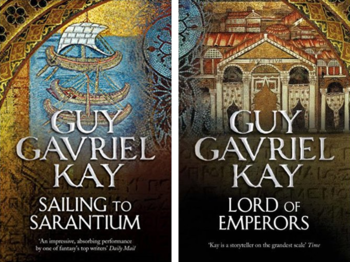 Set in the same world as Kay's earlier novel The Lions of Al-Rassan and his later The Last Light of the Sun (and thus, by extension, in the same universe as The Fionavar Tapestry and Ysabel), but in a different time and place, "The Sarantine Mosaic" is the story of (or at least, the story surrounding) one Caius Crispus, a mosaicist dwelling in Varena, Batiara (which is in no way Ravenna, Italy). Dispirited by a plague that killed his wife and daughters, Crispin soon finds himself accepting a commission meant for his mentor that will take him to ByzantiumSarantium, as well as being given a secret mission by the imperilled queen of Batiaria meant only for the ears of Emperor Valerius II. Crispin's adventures overland will involve gods, armies, an incredible array of potential Femme Fatales, and lots of chariot-racing.

The duology is based on the history of the reign of the great Byzantine Roman Emperor Justinian I and his wife Theodora.