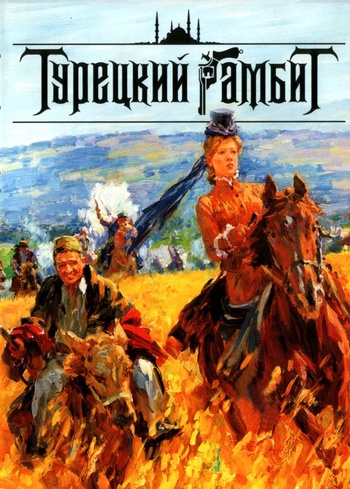 The Turkish Gambit is a 2005 Russian film, and the movie adaptation of the novel with the same name.

The movie takes place during the Russo-Turkish War (1877-8). After the tragedy that struck him at the end of the first novel, The Winter Queen, Erast Fandorin decides to enroll as a Serbian volunteer and fight in the war. However he is captured by the Turks. While attempting to escape he finds out that a renowned Turkish spy, Anwar Effendi, is about to infiltrate the Russian army and to sabotage their operations while the Turkish army invades a strategically important town of Pleven, Bulgaria, thus surrounding the Russian army. Fandorin sets his way to the Russian camp at the outskirts of Pleven.

Meanwhile, a young woman, Varvara Suvorova, attempts to get to the same camp as well, hoping to reunite with her fiancé Pyotr Yablokov. Her travel is however compromised when her guide abandons her in a dingy inn and runs off with all of her belongings. Thankfully, Fandorin happens to be there and helps her out. After running away from a troop of bashi-bazouks, they are rescued by the Russian army. After Varvara reunites with Pyotr and Fandorin is recognized by the General Mizinov and delivers the information, he is trusted to figure out who, among soldiers and journalists present at the Russian camp, is Anvar. Shortly after his arrival, the Russians mysteriously start losing battle after battle...