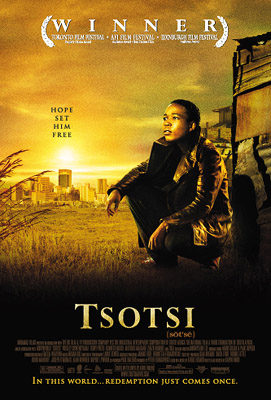 Set in a Soweto slum, near Johannesburg, Presley Chweneyagae plays the eponymous Tsotsi. Originally known as David, Tsotsi's mother died of a terminal illness during his childhood and he ran away from his abusive father. Adopting his present name (which means "street thug" or "gang member" in the vernacular of black South African low class urban areas), he is now a small-time criminal with two hoodlums, Butcher (Zenzo Ngqobe) and Aap (Kenneth Nkosi) under his wing. He has groomed himself to focus exclusively on his own survival; feeling no remorse for the acts he commits. His life is turned upside down, however, when one night, after shooting a woman to steal her car, he finds a baby, the woman's son, in the back seat...

Won the 2005 Academy Award for Best Foreign Language Film. One of only two films from the entire continent of Africa to win the Oscar, the other being Black and White in Color.