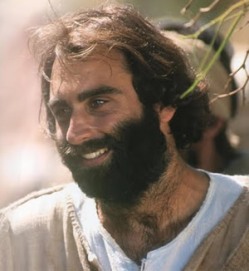 The Visual Bible: Matthew is a 1993 film dramatization of the life of Jesus as found in The Bible. It stars Bruce Marchiano as Jesus.
Advertisement:

Unlike most other Jesus movies which tend to go for Adaptation Distillation and/or Adaptation Expansion, the film is strictly based on just one of The Four Gospels, namely the Gospel of Matthew. The events, structure, dialogue and narration are taken virtually word-for-word from Matthew using the New International Version translation. No part is skipped, so the film runs for over four hours.

Followed by The Visual Bible: Acts, which dramatizes the Acts of the Apostles, with Marchiano reprising his role. The same company behind them, Visual Bible International, later produced The Gospel of John in 2003 with Henry Ian Cusick as Jesus.

See also Jesus, a 1979 film based word-for-word on the Gospel of Luke.