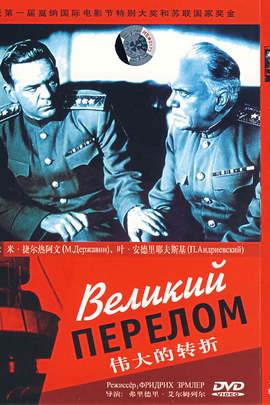 The Turning Point (Великий перелом) is a 1945 film from the Soviet Union, directed by Fridrikh Ermler.

It's a fictionalized account of the battle of Stalingrad

. As the film opens the Russians are in desperate trouble. It seems certain that Germans, who are bearing down on the city with all their might, will capture Stalingrad. And after they capture the city, they may wheel north and take Moscow.

Enter Col. General Muravyov, a dynamic commander who has been charged with saving the city. As he explains to his staff upon taking command, his goal is not just to stop the Germans, but to defeat them.

One of eleven films to win the Palme d'Or in 1946; Cannes was making up for lost time after World War II interrupted the ceremony for five years.

Not to be confused with 1977 American ballet drama The Turning Point.