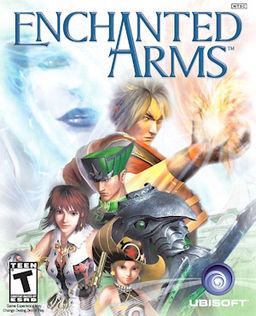 An Eastern RPG developed by FromSoftware and released in 2006 for the Xbox 360 and ported to the PlayStation 3 in 2007. It tells the story of Atsuma, a student at Yokohama's Enchanter's University, where students learn the art of enchanting, and the history of the Golems and the Golem War.

One day, Atsuma and his friends Toya and Makoto skip their afternoon classes to attend the annual Yokohama City Festival, which celebrates the peace that was gained after the Golem War. During the festival, several of the Golems go berserk and cause a riot. Atsuma and his friends return to the university and enter the Sealed Ward, which has been unsealed, and find the Queen of Ice, a Devil Golem from the Golem War with regeneration powers.

During the battle, Atsuma's arm, which has the power to negate enchantments, transforms him into something that can negate the Queen's regeneration power. During the battle, Makoto is presumably killed, Toya is kidnapped, the Queen destroys Yokohama City, and Atsuma wakes up in a prison in London City.

Since it was one of the first next-gen RPGs, it received reviews that ranged between the 60 and 80% grades, making it a slightly above-average title. It features a pretty unique grid-based battle system, which allows for four party members, area attacks, elemental based attacks, and you can also create your own Golems to fight with you.