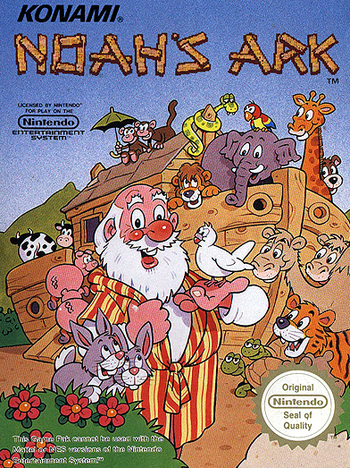 Noah's Ark is a 1992 Platform Game for the Nintendo Entertainment System made by Konami. Despite being based on the Noah's Ark story from the Bible, it takes quite a few liberties with the story. The game was only released in PAL territories, thanks to Nintendo of America's strict rules regarding depictions of religion. The game eventually saw a worldwide release on Steam.
Advertisement:

In the game, you play as Noah, who has to rescue 7 selected animals around the world who are captured by native people. Naturally, the whole game takes place during the flood and the water slowly rises throughout the stages.

Not to be confused with the 1994 game Super 3D Noah's Ark, made by completely different developers.