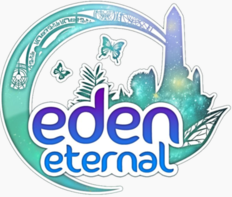 Eden Eternal is a Free-to-Play MMORPG for PC, developed by Taiwanese developer X-Legend and released in October-November 2010 in the Chinese-speaking countries, and on 16th June, 2011 globally. It makes its mark by borrowing and uniting successful features from a variety of popular older Eastern and Western titles and wrapping them in a Animesque art style, with the addition of a unique mechanic that allows a single character to switch between and level all of the game's classes at any time. Aeria Games provides the Western/Global service and has done a relatively excellent job, with enough pop culture Shout Outs to make a drinking game.

The game takes place in a Fantasy Kitchen Sink where infighting between various species of Beast Men has been interrupted by the re-emergence of an ancient evil. The Player Characters are humans born from blue crystals, who have great powers that allow them to stand a chance against the enemy. However, the recent addition of the Zumi mouse-race has revealed that it is not merely humans but heroes of all races that are born into the land through the crystals. With most of the NPC races yet to be made playable, who knows how the rest of the legend will unfold?

Not to be confused with Eternal Eden, an indie RPG made using RPG Maker VX.