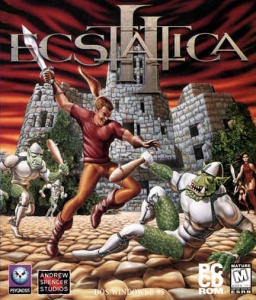 Ecstatica II is the sequel to Ecstatica, an action-adventure game for PC that was released by Psygnosis in 1994. The game was released on CD-ROM in 1997 for Windows 95.
Advertisement:

The story starts right where the first game ended, when the Nameless Traveller, who turns out to be a Prince in an unnamed country, rescued Ecstatica from the doomed town of Tirich. The Prince returns to his kingdom with Ecstatica, planning to get married, only to find out that his castle had been savagely pillaged and plundered and his people have been brutally massacred by demons, goblins, and human barbarians. Just as they arrive at the drawbridge, a winged demon flies by and kidnaps Ecstatica while the Prince is knocked unconscious by another winged demon, only to wake up and realized he has been put into the castle's pillory. However, the Prince is revitalized and set free by a mysterious female voice that urges him to defeat the evil Archmage to restore the balance of the world by restoring the 7 Elder sign and at the same time to rescue his beloved Ecstatica from the Archmage before she is used as a sacrifice.