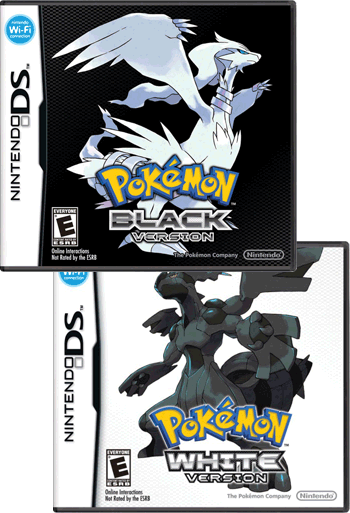 It's not always black or white. But the truth and ideals will fuse together...
"What are the true motives of Team Plasma and the mysterious N? What is the secret of the Legendary Pokémon? Adventure across the Unova region and discover all-new Pokémon!"
— Blurb on the back of the boxes of Pokémon Black and White Versions
Advertisement:

Not to Be Confused with Red and Blue, which were in black and white since they were for the original Game Boy. Also not to be confused with the simulation game Black & White. The English dub of the Animated Adaptation known as Pocket Monsters: Best Wishes in Japan also shares the same name as these games.

There was also an online Japanese release of Pokémon Battle Chess: BW Version, a "chess and Shōgi"-hybrid board game themed after Pokémon Black and White, available here