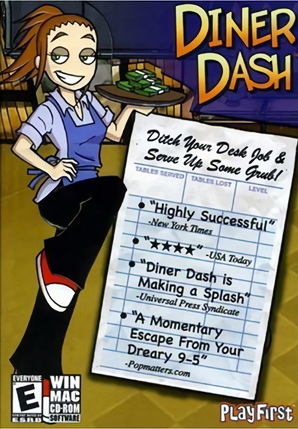 Diner Dash is a series of Time Management Game first developed by Gamelab and PlayFirst. The games stars Flo, a former stockbroker turned restaurant owner, who also serves as both the receptionist and waitress as she makes riches, builds more restaurants, and provides quality service along the way.
Advertisement:

Originated as a PC game, and later ported to various consoles, Diner Dash is perhaps the Trope Codifier of the Time Management Game genre. Its popularity has led to a variety of sequels and spinoffs by other studios, with varying levels of success.

Diner Dash Adventures has its own page due to its numerous deviations from the previous entries.

Not to be confused with Dine and Dash, though there is an individual character who does that.

See also Plantasia for a similar game made by the same developers.