Here are the colorful, quirky characters of Diner Dash! 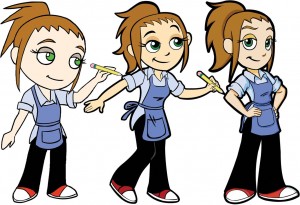 A spunky, sassy, no-nonsense small-town girl who packed up and moved to the big city to try and make her way in life. After an initial foray into the high flying business world, Flo rejected the boring, cubicle filled life before her and decided to make a sudden spirited change! Taking matters into her own hands, Flo quit her job, rolled up her sleeves, donned an apron and opened up her very own greasy spoon restaurant. Strong-willed and practical, with an unflagging work ethic, Flo likes to bring order to chaos and see a job well done.'

Flo's Platonic Life-Partners that have been through many things with her from a simple diner to five star restaurants. He start out as a black figure but is given proper appearance in Seasonal Snack Pack.

Grandma Florence and Flo share a special relationship. Grandma often babysat for little Flo and would take on a local adventure (zoom ballpark, museum, etc.) every week. Grandma Florence has always been full of energy and a little on the wild side. She drives a BIG pink car that Flo dubbed the "Flomobile", and she drives it FAST! Before little Flo was born, Grandma ran a disco restaurant, but wasn't able to keep it afloat, and the city turned it into a parking lot. She's always been proud of Flo and her success running her restaurants.

Darla made her Diner Dash debut when her cafe was nearly demolished by Mr. Big in Restaurant Rescue. Fortunately her good friend Flo came to her rescue and together, they were able to save Darla's cafe. Flo and Darla later decide to treat themselves to a much needed vacation but end up waiting tables themselves after a chaotic string of events!

One of the longtime customers of Flo's Diner. She and the other Regulars were Flo's very first customers. A sweet, cute young lady. She and the other regulars don't eat too fast or too slow. She also appeared in many other Dash games. Later on, with the help of Flo and friends, she became a Soap Opera Manager/writer.

Mr. Big is the powerful CEO of his company, Big Corp., and is the closest to an antagonist as far as the games go. Once an aspiring amusement park entrepreneur, his plans went down the toilet, forcing him to turn to Grandma Florence and a then-young Flo for help. He has benefited from their kindness since then, but although his financial successes increased, he became an amoral businessman who will do anything to stay on top. Most storylines since his debut have Mr. Big trying to undermine Flo and co. so he can assimilate their businesses into his company, with the main protagonists being his only obstacles.

A newcomer to Flo's Diner. Skip was hired by Mr. Big to undermine Flo's restaurants through "dine-and-dashing", ensuring that Flo would lose profit and allow Mr. Big to execute a corporate takeover. He functions like any other customer... until he finishes eating, after which he'll try to skip out on paying. Clicking on Skip while he's running will stop him in his tracks and force him to give cash.

A newcomer to Flo's Diner. Hennui is a gloomy customer who is in a constant state of depression, so Flo has to calm him down by giving him menus before he can be seated and served.

A longtime customer of Flo's Diner. Barb is a fast-eating customer who gives Flo big tips, though it is countered by her health bar depleting faster than usual the longer she waits.

Debuting in the Wedding Dash series

Quinn is a vulnerable, lady-like, Southern belle. Always the bridsemaid and never the bride, Quinn stumbled into the Wedding Planning business when her friend Amy roped her into organizing her nuptials at the last minute. Organized, great at multi-tasking, and possessing a natural perfectionist streak, Quinn worked through her early insecurities to become a confident and successful business owner.Debut: Wedding Dash

Debuting in other Diner Dash spin-offs

A talented fashion designer who also has a real knack for fixing up machines. She's energetic and super smart, but always humble. Bobbi revolutionized shopping by inventing machines that transform a piece of fabric into a piece of clothing in a matter of seconds. Customers love shopping at Bobbi's, where they can get whatever color, style, and pattern of clothes that they want. Bobbi's inventions were inspired by her friend Flo, who claimed that shopping for clothes should be as simple as ordering a burger.

Scarlett is Flo's old friend and work colleague from her Big Corp days. Scarlett was the Finance Director at Big Corp but she downsized herself soon after Flo quit, in order to make more time for "herself". Deep down, though, she's still the ultimate overachieving executive always on the lookout for her next big opportunity. When her beloved fluffy uptown cat Wendy shows up with a flyer bearing the news "pet spa for sale", Scarlett senses this might just be her next big move - but she's just short of the down payment. Flo suggests becoming partners with another fellow pet lover, Walter, a struggling musician whose dog, Rocky, thinks napping is a career move. Walter moves from one job to another, always following his latest whim until Rocky brings home a flyer about a pet spa for sale. This would be the perfect gig if only he had the "do-re-mi". Walter has always been great with animals. All would be groovy in the cosmos, if only he had the money! Hearing him complain about his situation over a stack of whole wheat pancakes, Flo suggests becoming partners with Scarlett, a high-powered entrepreneur.

Cassie is a smart college student and a good friend of Flo's. When her grandparent's struggling pet shop was almost shut down by Mr. Big's "MegaPet" super store, Cassie took on the challenge of making the business successful again. Though usually polite and unassuming, Cassie does not like to be pushed around! She has a good head on her shoulders and a keen business sense, both of which she uses to help her friends in Diner Town.Debut: Pet Shop Hop

Mr. Big's other daughter besides Vicky, who competed with Cassie Fisher on who had the best Pet Shop. Her name is NOT to be confused with the one from Animaniacs.