Film / The Wages of Fear 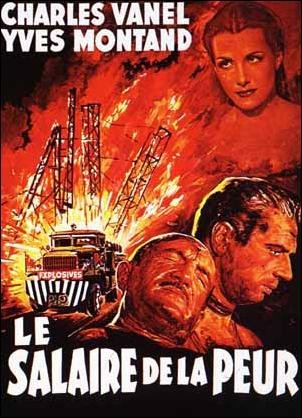 The Wages of Fear (French title: Le Salaire de la peur) is a 1953 French-Italian drama film directed by Henri-Georges Clouzot, starring Yves Montand, and based on a 1950 novel by Georges Arnaud.

The film centers on the fates of a handful of men who are stuck in a squalid South American town. The town, Las Piedras, is isolated due to the surrounding desert but it maintains contact with the outside world through a small airport. However, the airfare is beyond the means of the main characters (many of whom are also noncitizens without proper paperwork for work or travel). There is little opportunity for employment aside from the American corporation that dominates the town. The company, Southern Oil Company, called SOC, operates the nearby oil fields and owns a walled compound within the town. SOC is accused of unethical practices such as exploiting local workers and taking the law into its own hands.

The first half of the film develops the main characters by examining their daily struggles. Most of the action takes place in the town's cantina. The four most prominent characters are: the Frenchmen Mario and Mr. Jo, the Dutch Bimba and the Italian Luigi. Mario is the main character, an optimistic Corsican playboy. Jo is an aging ex-gangster who ran bootleg liquor, and just recently found himself stranded in the town. Bimba is an intense, quiet individual whose father was murdered by the Nazis, and who himself worked for three years in a salt mine. Luigi, Mario's roommate, is a jovial, hardworking individual, who just learned that he is dying from lung disease. Mario befriends Jo due to their common background of having lived in Paris, but a rift develops between Jo and the other cantina regulars because of his tendency to want to come off as a bigshot.

The catalyst to the film's action sequence is a massive fire at one of the SOC oil fields. The only means to extinguish the flames and cap the well is nitroglycerine. With short notice and lack of proper equipment, the only means of transportation are jerrycans placed in two large trucks. Due to the poor condition of the roads and the highly volatile nature of nitroglycerine, the job is considered too dangerous for the unionized SOC employees.

The company recruits truck drivers from the local community. Despite the dangers, many of the locals volunteer, lured by the high pay: US$2,000 per driver.note Equal to about US$20,000 today, so definitely a big chunk of change. This is a fortune to them, and the money is seen by some as the only way out of their dead-end lives. The pool of applicants is narrowed down to four handpicked drivers. All the main characters except for M. Jo are chosen. Smerloff, one of the chosen drivers, fails to appear on the appointed day for unknown reasons and Jo is substituted in his place. The other drivers suspect that Jo murdered Smerloff in order to take his place.

The final half of the film is an extended action sequence focusing on the drive to the oil field. M. Jo and Mario are in one vehicle, and Luigi and Bimba are in the other, with thirty minutes separating them in order to limit potential casualties. The drivers are forced to deal with a series of physical and mental obstacles, including a stretch of road called "the washboard", a construction barricade that forces them to teeter around a rotten platform above a precipice, and a boulder blocking the road.

Remade by William Friedkin in 1977 as Sorcerer.