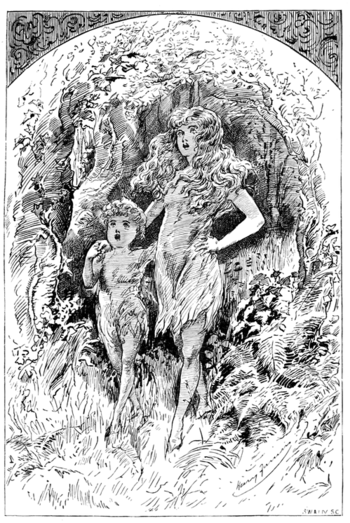 Bruno and Sylvie
He thought he saw an Elephant
That practised on a fife:
He looked again, and found it was
A letter from his wife.
'At length I realize,' he said,
'The bitterness of Life!'
First stanza of "The Mad Gardener's Song" note About the only part of Sylvie and Bruno that is widely known.
Advertisement:

One of the lesser-known works of Lewis Carroll, Sylvie and Bruno runs two parallel plots, one in something like the real world and one in Elf-land, both accessed by the First-Person Peripheral Narrator. The Elf-land plot involves the King standing down, for obscure reasons, in favour of his Most Definitely Not a Villain brother and "Sub-Warden", and his chancellor, leaving his two kids, the titular Sylvie and Bruno, as Heart Warming Orphans. The sort-of-real world plot involves a romance slightly complicated by a third party and oddly unaffected by the presence of a visitor from another planet/plane called Mein Herr, who is for some reason German-accented.

He also explains that his people practise selective breeding (ie, eugenics) with the eventual aim of making them lighter than air. Bruno innocently asks what happens to the people who are too heavy - a question which Mein Herr doesn't answer.