Literature / The Stones Are Hatching 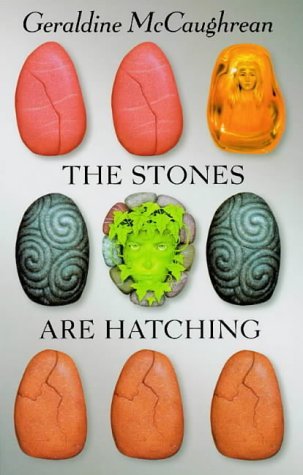 The Stones Are Hatching is a fantasy novel by Geraldine McCaughrean, published in 1999. It borrows heavily from Celtic Mythology and European folklore.
Advertisement:

One day, Phelim O'Green, a boy living with his sister Prudence shortly after the First World War, wakes up to discover his house filled with strange, filthy creatures called glashans, led by a creature who lives behind his stove called the Domovoy. They are hiding from a monstrous black dog. They force Phelim out of the house, referring to him as 'Jack'.

He meets a witch with no shadow or reflection called Alexia and a madman lives in trees and has inexplicably been alive since the Battle of Waterloo called Sweeney. They explain to him that a continent-sized worm called the Stoor Worm has been awoken by the sound of artillery from the war. As it wakes, it's eggs hatch, releasing various mythological monsters who are now rampaging across Europe. Phelim is 'Jack O'Green', a figure destined to slay the worm and save the world.