Film / The Sin of Nora Moran 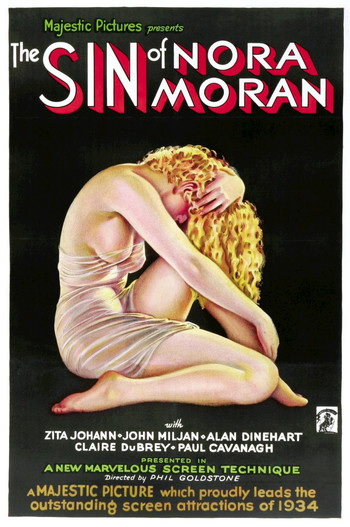 The Sin of Nora Moran is a 1933 film directed by Phil Goldstone.

The story is told through a fractured, layered narrative that is highly unusual for the era. As the story opens, Nora Moran (Zita Johann, who previously starred in The Mummy) is on death row, with her execution imminent. Meanwhile, a society wife named Edith confronts her brother, John Grant, about a stash of letters indicating that her husband Dick is having an affair. John reveals that Dick's mistress is in fact Nora Moran, the woman on death row.

John turns out to know quite a bit about Dick's affair and Nora's life. He recounts to Edith the whole story of Nora's difficult childhood, her traumatic rape when she was working for a circus, her tender romance with Dick, and its tragic conclusion.

This film is possibly best remembered for the advertising poster, drawn by Alberto Vargas

of "Vargas Girl" fame, named the #2 film poster of all time by Premiere magazine.

Compare The Power and the Glory, a higher-budget film (it had Spencer Tracy and Colleen Moore, rather than this cast of nobodies) also released in 1933, also with a disjointed Anachronic Order narrative and multiple points of view.