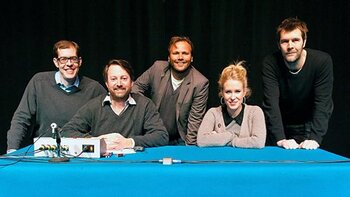 "Hello, and welcome to The Unbelievable Truth. The best panel show on Radio 4. About truth and lies. That I host."
— David Mitchell
Advertisement:

BBC Radio 4 Panel Game based around truth and lies, hosted by David Mitchell. Its pilot episode was made in 2006 and the first series broadcast in 2007. Two series each of six episodes are made in a year with Series 26 airing in the early autumn of 2021.

The format comprises four panellists,note The only time this has been deviated from was in two episodes of Series 25, which featured three teams of two - all three teams were made up of married couples generally stand-up comedians or comedy writers; there are no permanent panellists, but some of the more frequent ones include Susan Calman, John Finnemore, Graeme Gardennote who is the creator of the programme and co-owner of the company that makes it, which tends to be joked about whenever he's on, Tony Hawks, Lloyd Langford, Richard Osman, Lucy Porter, Arthur Smith, Holly Walsh and Henning Wehn.

Each of the guests will present a short lecture on a given subject, ranging from Isaac Newton to pigeons. Each lecture is a tissue of lies ranging from the plausible to the obviously absurd, save for five true pieces of information that the panellist should attempt to smuggle past their opponentsnote although it is common for panellists to accidentally include additional truths, for which points will be awarded to the guesser. Another player may buzz in if they believe they have spotted a truth; if they're correct, they win a point, but if they get it wrong they lose a point. At the end of their lecture, the panellist wins points depending on how many truths they have managed to smuggle past their opponents.