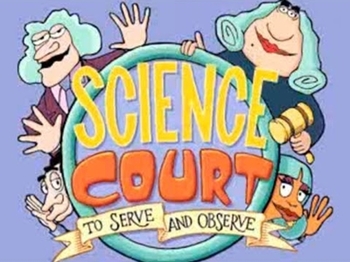 Based on educational software (sold directly to schools), Science Court was an Edutainment Show that premiered on One Saturday Morning in 1997. It was created by the same team behind the animation for Home Movies and Dr. Katz, Professional Therapist using their trademark Squigglevision style.

Every episode someone makes a frivolous lawsuit or criminal allegation against an innocent party, who would surely have never been in this mess if everyone understood Science! And so, with Science! on her side, defense lawyer Alison Krempel perennially defeats her ignorant nemesis Doug Savage with a roster of expert witnesses establishing that No, you cannot repair a snapped electric cord by tying the two halves together.

While the show technically ran for 3 seasons, the second was really just the first season presented in a revised format, adding a Teaser Opening and closing with bug-like hosts and a new segment in the middle called "See You Later, Estimator" hosted by the Science Court character Professor Parsons. (Some trimming was done to the rest of the program to accommodate these additions.) The third season also used this new format, but with new episodes instead of reruns.