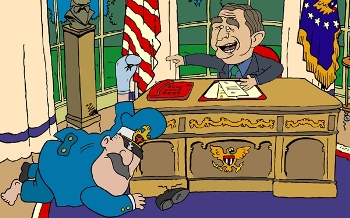 British animated satire series that ran from 2001 to 2004. Often considered the Spiritual Successor of Spitting Image and had many parallels with Dead Ringers due to sharing many voice actors.

About 60% of the material was about celebrities while the rest was about politics, a notable shift away from the latter relative to Spitting Image which perhaps tells us something about how Britain has changed.

Tony Blair and the Cabinet: Blair as a power-mad control freak with a Napoleon Complex, while Gordon Brown is The Starscream. Other ministers commonly appearing included John Prescott (a vehicle for fat jokes), Robin Cook (The Unintelligible) and David Blunkett.

George Bush in the White House: Bush oscillates between Psychopathic Manchild and innocently Too Dumb to Live, while a moustached (and unnamed) General tries to get him under control with the aid of a hand puppet called Professor Leibstrom. Recycled a lot of 'stupid president' jokes from 80s Spitting Image sketches about Reagan, but left the direct references to politics out, instead dumbing Bush down as somewhat of Homer Simpson clone.

Saddam Hussein: Prior to the war in Iraq, there were a series of sketches featuring Saddam hiding his weapons of mass destruction from the UN inspectors (of course, that was when even broadly anti-war satirists assumed he had any...) Earlier series had Osama Bin Laden being frustrated by the Taliban's lack of military technology.

The Royal Family: Mostly jokes about Prince Charles trying to take the throne and about Princes William and Harry's youthful mishaps. In one sketch, Harry brings back some Australians after having gone backpacking there and they proceed to take over the palace.

Posh and Becks: Primarily another vehicle for Too Dumb to Live jokes.

The England national side: Featuring Beckham again, Wayne Rooney, manager Sven Goran Erikson and so forth.

There were also a great number of one-off sketches. In the vein of Private Eye style humour, a lot of these involved crossing over two news stories or parodying a show by referencing current political issues. For example, there was a parody of The Simpsons called "The Johnsons" (about Boris Johnson's family).