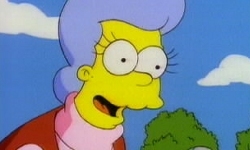 After faking his own death and getting the mistake cleared up at the town courthouse, Homer makes a discovery: his mother, Mona (Glenn Close) is still alive. She supposedly died when Homer was a kid. Mona's grave actually has the remains of Walt Whitman. But the joyous reunion at the cemetery is cut short when the FBI comes after Mona for something she did in the 1960s, which is connected to Mr. Burns and is why she abandoned Abe and Homer.

Much like Futurama's "Jurassic Bark", this episode was known for its Tear Jerker ending, where Homer once again has to say goodbye to his mom as she returns to the underground to evade authorities and Homer silently sits on his car and stares into the night sky.