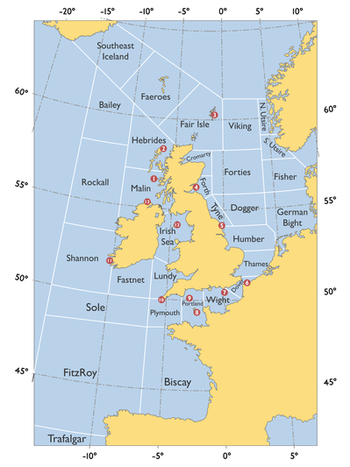 A forecast for people shipping things on boats.

Broadcast on BBC Radio 4. Always on LW and at the odd moments also on FM at 0048, 0520, 1201 and 1754. 0048 and 00520 also include weather reports from coastal stations and the inshore waters weather forecast. Read out loud with slowly and clearly, in short sentences with few words. Issued by the Met Office on behalf of the Maritime and Coast Guard Agency.

You may think this seems like the obscure kind of thing that only radio enthusiasts and the people who actually use the information would tune into. You would be wrong. It is very much a British institution, with many people listening to the Shipping Forecast and being able to recite a lot of it.

Maybe it's odd to some that a good percentage of one of the greatest developed countries in the world still have radios and use them frequently, but most Brits are familiar with this quirky little meteorological forecast that they can't really understand. Because they do still have radios. And they do still listen to them, at least at night. And, of course, it's broadcast on the BBC's more high-brow station. The fact that all of this is true and your average high school student is a fan of the Shipping Forecast probably confirms a lot more British Stereotypes than they'd really like.

The fact that the Forecast is read in a metronomic, sombre monotone, is crammed with terms incomprehensible to anyone not versed in meteorology, and includes the names of places, such as "Fair Isle", "Ardnamurchan", "Rattray Head", "Stornaway", "Tyree" and "Cape Wrath", that sound like they belong in a Dungeons & Dragons campaign, gives it the feel of a Magical Incantation. Some may defend their listening choices by explaining that, on for five minutes at 1 AM, being recited by a soothing voice, it is the perfect programme to put them to sleep.