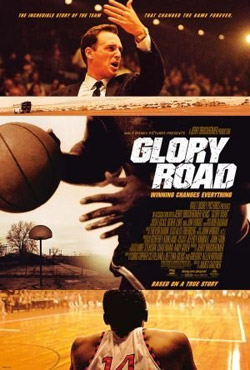 Glory Road is an American film directed by James Gartner, released on January 13, 2006.

The film is based on a true story dealing with the events leading to the 1966 NCAA University Division Basketball Championship,note At the time, the NCAA didn't sponsor women's sports (that didn't happen until 1981–82), and the NCAA membership was divided into the University and College Divisions. In 1973, the NCAA adopted its current three-division setup. The University Division became today's Division I, while the College Division was split into Division II (with limited athletic scholarships) and Division III (no such scholarships). in which Don Haskins, head coach of the Texas Western College (now the University of Texas at El Paso) led a team with an all-black starting lineup, a first in NCAA history. The film follows a semi-fictional version of this tale.