Series / Two Pints of Lager and a Packet of Crisps 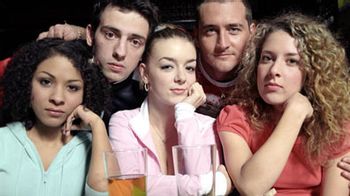 L-R: Louise, Jonny, Janet, Gaz, Donna.
Two Pints of Lager and a Packet of Crisps (commonly shortened to Two Pints or Two Pints of Lager) is a BBC sitcom written by Susan Nickson. It is set in the town of Runcorn in Cheshire, England, and revolves around the lives, loves and assorted issues of five friends, consisting of the motherly, caring, yet slobbish Janet Keogh (neé Smith), slacker but sensitive and all-round nice guy Jonny Keogh, who is Janet's long-term boyfriend and later husband, the laddish Gaz Wilkinson, whose brain power definitely isn't his strong point, the ambitious and hot-tempered Donna Wilkinson (neé Henshaw), who is Gaz's long-term girlfriend and later wife, and the narcissistic, insensitive and often rather bizarre Louise Brooks. In later seasons, Timothy "Tim" Claypole, the Archer's bitchy and camp new barman, and Donna's new boyfriend, the overly Cockney, initially unpleasant but later rather friendly Wesley Presley, were added to the cast roster. The show was first broadcast in 2001, and ran for nine series over a decade, making it one of BBC Three's most popular shows.
Advertisement:

While the first two seasons of the show consisted of a mere six episodes each, the later seasons were much longer. There have also been four "special" episodes - a musical special, which was standalone, a horror special, which, while non-canon, was added on to the end of the sixth series, a live special, which was the seventh season opener, a Comic Relief special, and two specials that aired in 2009, consisting of another musical, and a Sliding Doors parody.

Although Two Pints is a comedy series, it has shown itself to be more dramatic and serious, usually towards the end of a season. The final episodes of each season tend to end on a bittersweet, and sometimes quite a sad note.

The show is mainly known for its adult, sometimes scatological humor, mostly involving references to sex and private bodily functions. The humor has also become rather surreal at times, most notably in the "special" episodes. The series is also known for rather naughty language. However, the word "fuck" is uttered only once in each series, and always in the final episode.

The show's ninth season aired in 2011, with two new characters, after Sheridan Smith (Janet) and Kathryn Drysdale (Louise) stated they would not be returning to their roles. This prompted... mixed reactions

, to say the least. Despite the ninth series ending with the intention of the show continuing, the show was cancelled a short while after it finished.