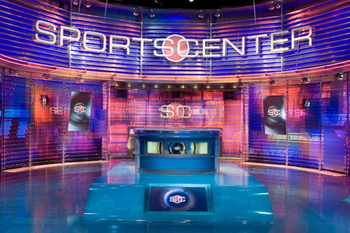 The flagship program of the sports network ESPN, SportsCenter has been a staple of the American sports landscape since 1979.

SportsCenter, which celebrated its 50,000th episode in 2012, is a sports highlight and analysis show that can be seen at almost all hours of the day on ESPN. Someone who wakes up at 7 a.m. can flip on the TV and watch SportsCenter until they leave for work at 8:30. When they come home at 5 p.m., they can watch the primetime version of SportsCenter. When they go to bed at 11 p.m., they can watch the late-night version, and then the edition from Los Angeles updated to catch the West Coast scores at 2 a.m. And since 2008, they have been able to watch it when they are home sick on a weekday all the way to 2 p.m. And since 2010, when it took over most of the ESPNEWS schedule, all day long.

What started as a simple, low-budget highlight show has, like its parent network, metastasized into a kind of pop culture leviathan that frequently influences the sports world it covers.

SportsCenter truly rocketed to national prominence in the early 1990s, when the 11 p.m. broadcast was anchored by Dan Patrick and Keith Olbermann (yes, that Keith Olbermann). The two were smart, witty and cultured and they introduced a brand of cutting humor to the broadcast that made it must-see TV. Some of the scenes in Sports Night (and indeed arguably the characters) are references to this—including the "left off the letter 's' in 'bulging disk'" bit. Of course, on SportsCenter, nobody caught it before airing... to make the connection between real live and fiction even more bizarre, Olbermann did a Sports Night skit with actor Josh Charles on his ESPN show Olbermann. He even said "If Aaron Sorkin had written this script, you wouldn't have believed it". Here's the link

Unfortunately, Olbermann, by his own admirable admission, was a bit of a prick and left the network in the late 1990s, though he and Patrick remained friends. Patrick expanded his role into other areas of the network, leaving SportsCenter in the hands of Patrick's post-Olbermann partner, Kenny Mayne, as well as the alternate duo of Rich Eisen and catchphrase machine Stuart Scott. When Eisen left in 2003 to become the on-air lead of the newly minted NFL Network, SportsCenter was left to be anchored by a collection of new talent who sought to emulate Scott's painfully hip catch phrasing (with varying degrees of success) rather than the Olbermann/Patrick/Eisen urbane snarkiness.

For all the complaining about the show (Internet sports fans have been savaging it as a shallow, controversy-seeking program for far more than a decade at this point), SportsCenter is more popular than ever. There are no serious national challengers to its dominance. Over the course of about 20 years multiple networks (most notable Fox, who even recruited Olbermann for a short time after he left ESPN) have invested a lot of money and top-flight talent in an attempt to make their own version of SportsCenter, but all have failed.

Canadians have their own counterpart, SportsCentre (note the different spelling) on TSN, which since the early 2000s has become a Canadian Expy of ESPN (thanks to ESPN holding a stake in it). Ironically, TSN's lead SportsCentre anchors, Jay Onrait and Dan O'Toole, who were basically the Canadian counterparts to Patrick and Olbermann, ended up being poached by Fox in 2013 to anchor their latest SportsCenter competitor Fox Sports Live, the flagship show for their new national sports cable channel Fox Sports 1 (Fox Sports Live, as usual, struggled and was retooled into more of a talk show before being cancelled in 2017, with the duo having since returned to TSN). Dan was let go by Bell Canada, the owners of TSN, as part of company-wide cuts in 2021.

An increasing trend for the network is to have shows that originate from Los Angeles instead of the network headquarters in Bristol, Connecticut. The late Sports Center (10pm Pacific) moved there in 2011 (hosted by Stan Verette and Neil Everett), and SportsNation moved in 2013 (with Marcellus Wiley replacing Colin Cowherd).

Outside of sports, the show is also famous for its incredibly funny This is SportsCenter commercial series, featuring athletes and celebrities in odd situations (such as Danica Patrick's race car getting towed from Dan Patrick's parking space, David Ortiz offending his mascot by wearing a Yankee hat, or the Manning brothers getting into a fight while taking a tour of the studio).