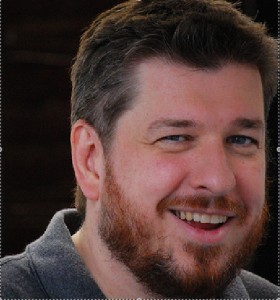 Writer who created TWO cult TV series: the popular TNT dramedy Leverage and the Saturday morning cartoon Jackie Chan Adventures. Also served as a co-writer for the So Bad, It's Good disaster film The Core and the first Transformers movie. His other credits include the Catwoman (2004) film (which he regards as Old Shame) and the 2005 unsold pilot for the Global Frequency TV series (which he's quite proud of). Has a blog here

. Generally an all around funny and great guy.

Previously the writer of the original Jaime Reyes Blue Beetle series and the Dungeons & Dragons series from IDW. His serial webcomic Arcanum was running weekly on Mark Waid's Thrillbent.com, but has gone on hiatus due to Rogers's unexpected success in picking up TV jobs after the end of Leverage. After Leverage he worked on The Librarians 2014, and The Player.