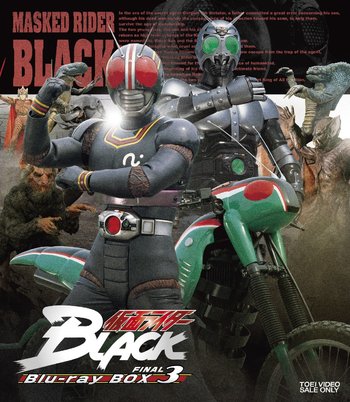 Go beyond time, run through the skies for this planet!
"The Earth is alive. Humans... Animals... Insects... They're all alive, loving peace!"
—Kamen Rider Black to Shadow Moon
Advertisement:

An evil cult named "Gorgom", consisting of Two Guys and a Girl in white capes and robes, intend to appoint a new leader by capturing two chosen humans, implanting them with two powerful artifacts called Kingstones, and having them fight to the death. The winner will be crowned the Creation King, and together with Gorgom they will Take Over the World.

Using the promise of power in their new world order, Gorgom recruited many famous and intelligent people to their cause. And the two lucky brothers to be chosen for this project- thanks to the fact that they were born during a solar eclipse- are Kotaro Minami and Nobuhiko Akizuki.

However, Nobuhiko's father suddenly turned against Gorgom and interrupts the brainwashing process. This frees Kotaro from complete brainwashing, but he still retains his strength enhancements and Kingstone. This allows him to transform into "Black Sun", redubbing himself "Kamen Rider BLACK".

And so begins Kotaro's battle against Gorgom to prevent more casualties as well as saving Nobuhiko. However, things take a serious turn for the worse when Nobuhiko suddenly revives as "Shadow Moon", the champion of Gorgom and Kotaro's fated rival.

Voted #2 series in the Showa era, and #17 product overall in NHK’s All Kamen Rider Popularity Ranking.