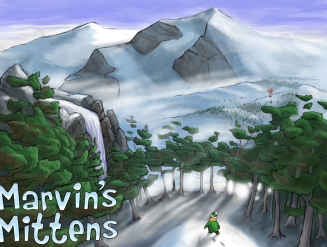 Marvin's Mittens is a charming 2D Platform Game, with light Metroidvania elements but absolutely no enemies in it. It was released for PC in 2014 by Breakfall, and is available on Steam.

A little boy called Martin is playing in the snow when suddenly one of his mittens is stolen. He soon finds a camp of elves who have had their mittens stolen too.

When Martin declares he's going to get all their mittens back the elves grant him the power to float.