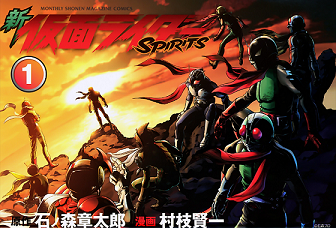 A manga started in 2001, drawn by Muraeda Ken'ichi and based off of the original Showa era Kamen Rider series (well, except for BLACK/RX). Essentially an alternative version of Kamen Rider ZX, depicting everything as the original shows would have done with an A-movie budget, it revives the first ten Riders for a Crisis Crossover.

Takes place in the present day (to the extent possible). It begins with Taki Kazuya (still an FBI agent) in New York City investigating a series of grisly vampire-like murders. As it is clear he can't rely on the Riders for help (Hongo Takeshi tends to appear and disappear like the wind), he has built his own Rider Suit, homaging Skull Man and informally known as "Taki-Rider". Taki is more than man enough to take on the Mooks, but when the man behind the plot shows up... so does Hongo and his Scarf of Asskicking.

Following that, we then see the other Riders battle various monsters of the week on their own, leading up to the appearance of the evil Badan Empire and their new champion, Kamen Rider ZX. However, Badan didn't expect the seemingly amnesiac ZX to regain his memories...

This series, more than anything else, is about reminding modern readers just how awesome the original characters were, without needing a revision. It's currently complete in 16 volumes, followed by a sequel Shin Kamen Rider Spirits.

The following tropes apply to this manga series: