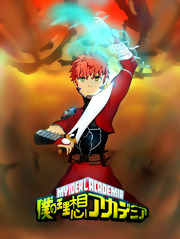 "As Shirou was dragged into the hole left behind by the grail, the grail itself reaches out to him, acknowledging him as the true winner of the Fifth Holy Grail war. His wish of becoming a Hero is closer to being granted than he originally thought. Now in a world where being a Hero is a feasible profession, will he become a true ally of justice?"
—Summary from Fanfiction Dot Net.
Advertisement:

. After Shirou's climactic battle with Gilgamesh at the end of Unlimited Blade Works, he, Archer, and Gilgamesh are all pulled into the Grail. As the victor of the Holy Grail War, the Grail acts to grant Shirou's wish of becoming a hero, and sends him to the world of My Hero Academia along with Archer, Gilgamesh, and Angra Mainyu. It also reduces Shirou's age so that he can attend UA.