Characters / Star vs. the Forces of Evil: Star Butterfly 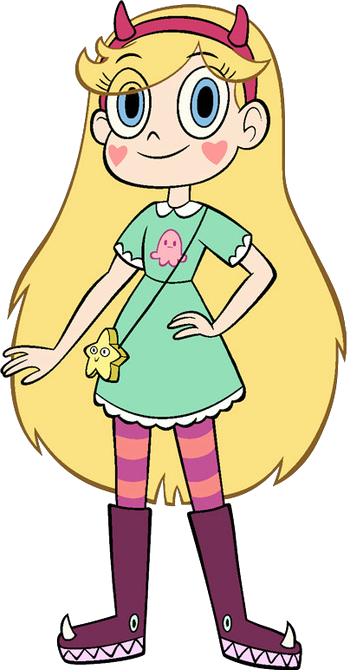 "Mewni should be a place of peace and unity for everyone. But for that to happen, we need to stop following the old ways. We need to be the change we want to see."

"Star the Underestimated
was queen for just four days.
Her one decision on the throne:
To give it all away."

A magical princess from the other-dimensional Kingdom of Mewni who is sent to Earth by her parents for safety's sake in lieu of sending her to St. Olga's Reform School for Wayward Princesses after misusing the magic wand she received on her fourteenth birthday. Lives with her earthly hosts, the Diaz Family.

She also loves to fight against monsters, but eventually comes to realize that monsters aren't so much as mindless enemies, but rather an entire race of people who have been systematically mistreated by Mewni's government. In turn, she resolves to fix the government's mistakes by trying to bridge the gap between monsters and Mewmans, being a very forward-thinking princess. She eventually abdicates the throne for Eclipsa, the rightful queen at the time, and becomes her primary advisor.