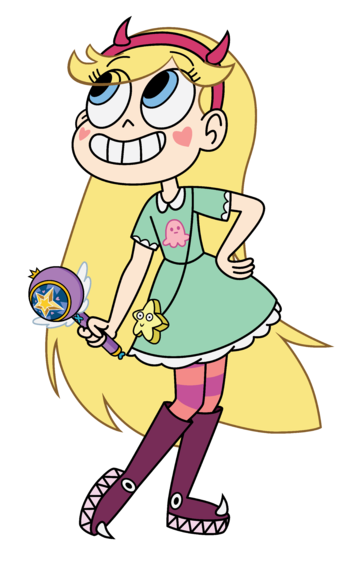 I'm a magical princess from another dimension! But you knew that already, didn't 'ya?

*A portal in the fabric of reality rips open in front of you. Shortly afterward, a blonde teenage girl holding a bright, glowing wand and a pair of scissors jumps through the portal as it closes*

Hiiiiiiiiiiiiii! My name is Star Butterfly! Sorry about jumping out at you. It's a long story. I was using my dimensional scissors that my friend Ponyhead gave to me. I was supposed to be picking up nachos for my buddy Marco! But, I guess I messed up a bit. Now I'm here, in this weird...place with all these words? And what's that text at the top saying Self Demonstrating? The heck is going in here?

Oh, wait, I'm sorry, where are my manners! You're probably confused, aren't you? Apologies. Anyways, like I said, my name is Star Butterfly! I'm the princess of Mewni, a far off kingdom from another dimension! I was supposed to take the family wand up and become the new queen, but...uh...well, I don't like to dwell on it. So my parents sent me to this weird place called Earth, where people who look just like me spend their time NOT doing magical spells and rather go to this place called School and do this weird thing called Math. Weird huh? I don't get it! Where are the warnicorns!?

But, whatever. Once I was enlisted as a thing called a "Foreign Exchange Student", I moved in with my pal Marco. Marco...is awesome. He's bestest bestest best friend in the world! Or...at least on Earth. My other friend Ponyhead is more my best friend in Mewni. But anyways, Marco is awesome, like I said! He makes nachos, he knows kah-rah-tah (that's how you say it right? And why are those words blue?) and he has feelings for this other awesome friend of mine, Jackie Lynn Thomas! I was able to help him get a date or two with her and now their officially boyfriend and girlfriend! BF and GF! But...I dunno, I do feel like Marco could do better. (There it is again! Weird.)

Oh, but whatever. Sadly, not everything is great. Recently I kinda had to go back to Mewni with my mom because Toffee was out to get me. ...Oh wait, I never talked about Toffee, did I? Oh my gosh, how could I forget Toffee! Yeah, so, basically I like to fight monsters as a hobby. One of these monsters is this weird ugly bird thing called Ludo. He kinda sounds like my dad if my dad were evil, short and wore rags. We had to team up once to defeat Toffee, who is this evil lizard guy who apparently sounds like an infamous serial killer. I don't hear it. Anyway, he pretended to work for Ludo before turning the tables on him and taking over. He kidnapped Marco and made me choose between letting him die and destroying my wand. I chose the latter. We got rid of him... or so I thought. Now he's apparently possessing Ludo's body and preparing to come looking for me. Mewni's about to go to war and I need to be there...

But, let's not focus on that right now! I think I know how to get out of here. So, I took a look around while I was explaining all that. It says that if I list these things called "troop-ees" about myself, then I might be able to get out of here. Well, okay then. I'm sure I could do that! I mean, anything to get out of here. (Okay seriously, what is this blue text about?}

And don't worry about me when I get back. Things might look bad but they always work out in the end. Especially when I'm involved! I'm Star Butterfly! I always win! Right?

*Another portal rips open*
Oh hey, what do you know? It worked! Well, I should go. This was a lot of fun! Hope I'll see you again soon! Byeeeeeee!!!