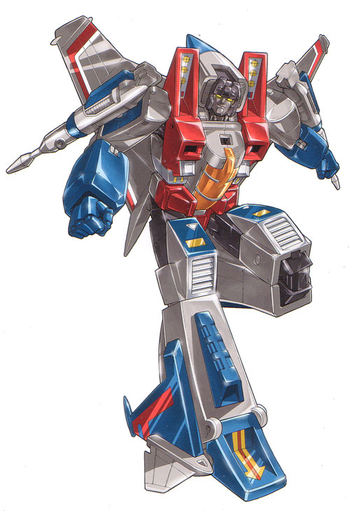 The One TRUE Leader of The Decepticons!

MEGATRON HAS FALLEN! I, STARSCREAM, AM NOW THE HEAD OF TV TROPES! Yes, foolish fleshings, feast your eyes on the true leader of all, ME!

I said, I AM NOW YOUR LEADER!

I see you are failing to grasp your current predicament. Very well, then perhaps I shall regale you with tales of my prominence. I. Am. Starscream, true leader of the Decepticon Army and greatest commander of the Seekers known to all! My origins are rather...hmmmm. Come to think of it, there are quite a few options, aren't there? Well, the most simple of them begins some time ago, on your wretched world in the year 1984. It would seem that there were those who had somehow heard of our exploits from Cybertron, and elected to sell small effigies of our likenesses to you fleshings. They simply chose to do so by exporting small figurines from elsewhere, then renaming them to fit the settings and names of our war. For some reason, they misconstrued my name as "Ulchtar!" Me! Fortunately, they realized the error of their ways and properly corrected their mistake. From that point forward, you humans worshiped the very ground on which I stood. Somehow or another, you deemed me the greatest of the Decepticons, in no small part thanks to those broadcasted recordings of our adventures. Well, a version of them anyway. Nevertheless, you wished for me, Starscream, to be leader of the Decepticons, as you bore witness to my multiple attempts to seize command from that incompetent wretch! Alas, they never seemed to succeed. Perhaps I underestimated his strength, or perhaps that accursed Optimus Prime dared to intervene. But I still continued to function. Well, for a time. Yet I managed to cheat death itself, and to this day continue to plot my schemes of conquering the universe and ending Megatron's reign once and for all!

I would also wish to note that it was I and I alone who managed to earn himself the rightful place of being the first Cybertronian to earn himself a page on this website. If anyone else does so, it will be automatically inferior to my own, for who could compare to my greatness? And yes, I am well aware that terrorist leader who sounds conveniently like me got his own page first, but I'm willing to forgive the transgressions of one who clearly recognizes my genius. However, I will take great pleasure in exacting my revenge on that insufferable Vulcan half-breed and that pathetic equine who both humiliated me! And woe befall on that snarky paranormal investigator if he ever dares to show his face! Furthermore, should that treacherous android and that insolent teenager who both made me look foolish dare to show themselves, I will see to it they perish before THE GREAT AND POWERFUL STARCREAM!!! And don't think I've forgotten about you, pretender! And you best leave your clumsy hands off my page, you accursed Autobot!

Now, it would be wise to read the entirety of this page and learn of my greatness. Your lives may very well depend on it.

Such tendencies of mine include:

There. And now that you have been enlightened on the topic of my brilliance, I will now ascend to leadership of the Decepticons, this site and this planet as YOUR NEW LEADER, and you will henceforth spend EVERY WAKING MOMENT of your short and miserable lifespans worshiping none other than I, the grand and merciful Starscream, OR ELSE—

WHAT!? WHO DISRUPTS MY CORONATION!?