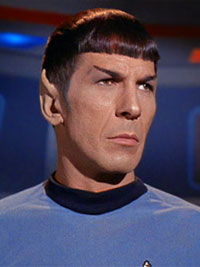 I am Spock, son of Sarek, of the planet Vulcan. I was originally slated to be a scientist, studying under the Vulcan Science Academy, but due to certain... disagreements with the heads of the Academy, I was instead motivated to pursue a career in Starfleet. For most of my service history I have been stationed on the Federation starship Enterprise, where I previously served under Captain Christopher Pike, but more recently I have served under Captain James Tiberius Kirk. My assigned role as a crew member of the ship is to serve the dual role of first officer and science officer. In addition to this, I advise the captain and ensure that his human emotionalism does not lead the ship into danger.

It appears you have found the page that details me as a person, so I presume you must in some way be curious about the subject. I must warn you beforehand that by your human standards, we Vulcans might come across as highly private people, and we do not tend to think of ourself or personal lives as subjects of very much interest, and indeed, I am myself rarely disposed to discuss personal matters. But I shall attempt my best to accommodate and satisfy your inquiries into the matter.

Tropes in which I have been involved include: